Teen Patti is a popular Indian card game that is normally played in a group of 3 to 6 persons and uses a 52-card pack without jokers. It must be noted that the online version of Teen Patti is quite different from the physical one played in India. For example, the Live Casino version gives you full control over the multiple gaming parameters, which results in enhanced user satisfaction, with little to no chance for foul play or malicious activity.

So carry on reading for game rules and to learn how to play Teen Patti.

How to Play Teen Patti Traditionally

At online casinos you generally will not find any versions of the traditional game. Because most casino games involve you playing against the dealer. In the traditional game of Teen Patti, each player is dealt three cards face down. But before that, a boot amount (min. stake amount kept in the table center) is decided and collected from everyone.

As the game progresses the pot money starts growing and is ultimately claimed by the winner of that hand. The winner is the player who remains in the game till the completion of the hand and has the best hand or the highest hand based on the cards ranking.

The ranking of the possible hands in Teen Patti is as follows. These rankings have been arranged from high to low for your convenience.

Basically, any hand of a higher type beats any hand of a lower type. For instance, the lowest run 4-3-2 beats the best color A-K-J.

Players who do not want to play either because their game is bad or because the stakes are too high can Pack at any time which means quitting the game. Finally, if there are only 2 players left either of them can call for a ‘show’ at their turn after putting the required money in the center as per the current stakes.

At this point, both the players show their cards, and the player with the higher game wins and takes the money in the center.

Once you have seen your cards, you must play Chaal unless you select any other available option, to remain in the game.

To remain active in a Teen Patti game, a Seen Player must play Chaal or Side Show if available. For Chaal, the player must put the bet amount in the pot.

A blind player can ask for a Show (which is essentially a blind show) only when there is one opponent remaining in the game. After asking for a show, the cards of both the players become visible and the winner gets the pot.

If you are a Seen Player, then you have a few options based on your current hand. If you don’t like your hand, then you can fold your cards. This action is called Pack. But if your hand is good then you have 2 more options to choose from Chaal and Side Show. Either of these 2 options requires the Seen Player to place a bet.

A Seen Player can ask for a Side Show. A Side Show basically means that you wish to compare your cards with the cards of the previous player.

You can do this only if the previous player is also a Seen Player and there are one or more other players still in the game. To execute a Side Show, you will need to put an amount equal to twice the current stake into the pot. Your request for the Side Show will be conveyed to the previous player.

1. Place an Ante bet.
2. You will receive 3 cards and the dealer receives cards.
3. If you want to play the hand, then you need to place a bet on Play equivalent to 2x your Ante bet.
4. If you do not like your hand, then choose the Fold option to muck your hand.
5. You have a certain amount of time to make your decision. If your time runs out, then your hand is automatically folded.
6. Dealer needs at least Queen high for his hand to qualify.
7. If the dealer qualifies, then the highest hand wins.
8. Payouts for players are paid 1:1 on Ante and Play bets. Online Teen Patti at live casinos is played like 3-Card Poker. It is one of the Top 5 live casino games in India. So, it differs from the traditional Indian version played among friends and family. For example, the highest hand is a Royal Flush (Q, K, A of the same suit). Whereas traditionally, a Trail or 3 of a kind of Aces is the highest hand.

Additionally, live Teen Patti Online players can also place bonus bets. Two different side bets exist Pair or Better and 3+3 Bonus. For side bets to be accepted, an Ante bet must be placed first. Even if a player folds his hand, his side bet options will remain valid until the hand is completed.

Pair or Better – When a player is dealt a hand that consists of a pair or a stronger hand, he will then receive a payout according to the hand strength. 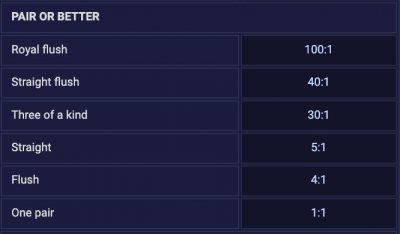 3 + 3 Bonus – A 5 card hand is made up of the Player and Dealer’s hand. If you have a 3 of a kind or higher than your bets will be paid out accordingly. 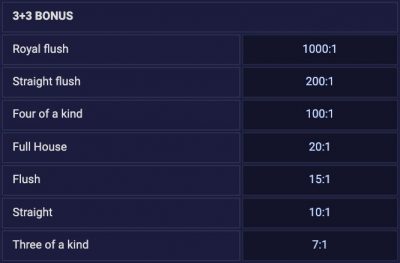 Player Tip: Side bets can add back a lot of value but can also cost your balance. So, make sure to choose side bet sizes according to your remaining balance.

Whether you’re a pro or a beginner, it’s an excellent strategy to start small. It also gives you a chance to understand the players and their strategies as you proceed with the game. You can eventually raise your bets when you become more comfortable with the game.

The following tips can help you win more at Teen Patti online.

Playing blind is where all excitement of online Teen Patti is. It simply means to place a bet without seeing the other players’ cards. If you have become familiar with the rules and proceedings of the play, you will be more comfortable playing blind because it gives you an advantage over unseasoned players. You will see that many players are quick to fold even when their cards were better than yours, leaving the field open for higher bets to be placed.

All Cards Can Be Played Well

There are no bad cards in Teen Patti; it’s all about how well you can read the other players. Many players do not want to risk much and will fold quickly even with better cards. So you can always keep the other players hooked, no matter which cards you have.

Make Use of Sideshows

Sideshows are there for a reason. You can ask the last player who placed the bet to show their cards unless they are playing blind. This ploy is perfect if you want to confirm your cards are better than the other players’.

Being predictable can get you killed. If you’re faced with perceptive and watchful opponents, you need to keep them guessing. Spring a surprise now and then to keep the others on their toes.

Observe The Game After You Fold

Learning is essential in bagging wins in the long run. No matter how skilled you are, there may always be a better player. If you’ve had to fold, stay around to observe what the players in the game are doing. This will help you brush up on your skills.

Just like any popular card game, Teen Patti has an ever-growing number of game variations to spice up the action.

The dealer deals 6 cards to everyone. For three rounds, players will cover one of the open cards of the Plus Sign with one of their cards. At the end of 3 rounds, everyone will have 3 cards and the final set of jokers of the plus sign will be what is on the table. Then the game proceeds as per the regular Teen Patti rules.

The dealer deals 3 cards to everyone and then opens table cards which are twice the number of players plus three (if there are 5 players, then 13 cards are opened). This is followed by 2 rounds in which each player picks up one open card and discards one of his own into the pack or closes one card on the table.

Then the game proceeds as per the regular Teen Patti rules.

This variation of the game is like Baccarat. Bettors can place bets on who will have the best hand, Player A or Player B.

The minimum bet is always 1 counter. The maximum initially allowed bet is 1/4th the amount in the center. After a player wins 1/4th, the next max is ½ and then full. The game goes on till one player wins the entire money pot.