The 2022 French Open is around the corner and Live Casino India is offering you exclusive access to the best sportsbooks in India. As a service to you, here are some betting pointers you need to consider before investing your hard-earned money and getting a chance to win big on the Parisian clay. Let’s dive into it.

Place Your Bet on The 2022 French Open

Global tennis is extremely dynamic, and every grand slam comes with multiple mini-stories and subplots. Check out these key ones before you start betting. We have probably seen the last of Roger Federer in Roland Garros. The Swiss maestro is ramping up his physical training ahead of the upcoming Basel tournament, but we’ll probably not see him again on the red clay. We doubt he had a chance to go deep into the second week of The 2022 French Open anyway, but it’s safe to assume and important to understand that Federer will not be a big factor in men’s tennis again.

LCI Recommendation: Keep Roger Federer in your hearts, cherish the memories, but don’t bet on another comeback, literally.

Russians and Belarusians Will Play in The 2022 French Open The Russian invasion of Ukraine is claiming more and more lives. Wimbledon organizers have already banned Russian and Belarusian players from participating in this year’s championships, but that’s not the case in this French Open. Keep an eye on Daniil Medvedev. He lost to Rafael Nadal in the Australian Open final earlier this year, but it won’t be surprising to see him in another grand slam final-4.

LCI Recommendation: Medvedev should easily go deep into the second week of The 2022 French Open. On the ladies’ side, keep an eye on Belarusian Aryna Sabalenka. Novak Djokovic was in the news for all the wrong reasons before the Australian Open. His anti-vaccination stance allowed Nadal to pull away in the GOAT race and took him off the boil when it comes to playing form. He did make the semis in the recent Madrid Open, but the Serb was clearly not in peak condition and we can’t recommend him as a “safe bet” beyond the first week in Paris.

LCI Recommendation: We’ll be very surprised if Djokovic reaches The 2022 French Open finals this year. He also doesn’t seem focused on winning like in 2021. 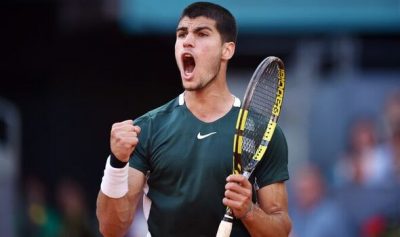 Carlos Alcaraz has arrived. He won the Madrid Open in an impressive fashion after beating all top players, including Rafael Nadal and Djokovic. Everybody knows that this youngster is going to become a household name very soon, but will this start in 2022? Nadal is looking at a potential semi-final encounter with Djokovic, while Alcaraz has a relatively easy path to the finals. We think he will be in the final this year.

LCI Recommendation: We believe that there will be a change of guard this year as Nadal has regressed physically, by his will and determination can cause problems for in form players. Naomi Osaka was seen by many tennis enthusiasts as an improved version of Serena Williams, but her game is regressing. To make matters worse, she injured her ankle in the recent Madrid Open. We surely feel that the talent and potential are there, but our recommendation is to avoid betting on her.  Osaka’s attitude has changed in the last couple of years and we doubt she’ll live up to her true potential at the 2022 French Open.

Live Casino India will be covering the French Open closely on Twitter. Make sure you follow our feed @LiveCasinoIndia to stay informed and learn about exclusive promotions. We also encourage you to bet responsibly and engage only with trusted sportsbooks that we are sharing with you on our website. Game. Set. Win.